Why choose to synchronise multiple generators rather than have one large generator?

Additional sets can be added as the demand rises. We can offer systems based on generators from 250-2200kVA with multiples of up to 32 units.

The load management system automatically calls up for generator(s) as the load rises and then drops set(s) out as the load falls. This means that set(s) are not running unnecessarily on low loads.

The duty cycling facility within the system enables nomination of the lead set. This allows for equal usage between all the generators in the system.

Ability to upgrade the system for a no break mains return

Synchronising & load share systems 250-2200kVA (Per Generator) up to 32 units can be Synchronised together.

Take a look at our extensive range of generators here

With this system, each generator has a set mounted DSE8610 controller with integral synchronising and load share equipment, a circuit breaker with motor operator and a droop ct.

A communications cable is the only inter set connection required and it is therefore simple to add further sets into the system.

We can supply a separate common load panel to cater for the combined output of the generators. 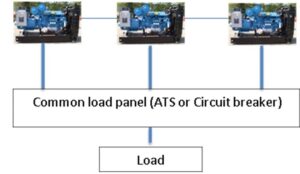 With this system each generator is supplied without any set mounted instrumentation or controls. A fixed circuit breaker can be fitted to each set for cable protection if required. A droop ct is fitted to the alternator.

The DSE8610 and motor operated circuit breaker are installed in a floor standing suite of control panels normally segregated into one section per generator and a separate adjacent load output section. The suite contains copper busbars from each generator to a common load take off/load output section.
The communications cabling is also included within the suite. The suite can be supplied with either a common load ATS or common load MCCB/ACB section up to 6300 amps. Because of the inherent flexibility of the suit system we can incorporate additional equipment such as distribution breakers. 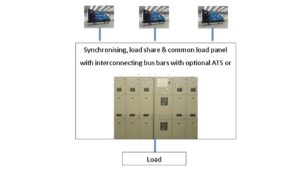 The system can be left in full automatic mode so that when the start signal is received the system will start, synchronise and load share, until such time that the start signal is removed, whereby the generators will be held in a state of readiness for the next start request. During operation, the system will monitor the load demand and start/stop generators depending upon requirements.

There are two methods of starting the generating sets in the synchronising system:

Manual starting is achieved by the user physically starting the generator by use of the push buttons on the front of the control unit (Deep Sea 8610).

Automatic starting will commence when a signal is applied to the controller, and cease when this signal is removed. All load demand parameters will be monitored by the controllers during the automated run period.

Load Demand/Load shedding and lead set priority nomination upon starting, there is a further safety on delay timer to allow the starting alarms (oil pressure, generator voltage, generator frequency etc.) to reach their lower threshold limits. Once these have been achieved, the generators will enter their loading sequence. The generator that is selected as the lead generator will automatically connect to the common bus, whereas the remaining generators will synchronise to the running generator.

The system is designed to provide economical use of the available generating sets that are contained within the system with regard to equal load distribution and fuel consumption, and provides load demand/load shedding and lead set priority nomination.

Following an automated start signal, all the sets in the system will start, synchronise and load share such that the full available generating set capacity is available to meet the potential load.  After a pre-set time delay, the system will monitor the load, and if this is below a pre determined (programmable) level, will automatically remove one or more sets from the system in accordance with the lead set priority nomination. These will be held in readiness until such time as the load increases, whereby the dormant generators will be started, automatically synchronise to the running set(s) and connect to the load.  Upon removal of the remote start input, the generators will disconnect from the common bus and enter the stop sequence.

The following is an example of how the system works for three x 750 kva sets:

The load demand system works by setting a minimum and maximum setting % in kW in each controller. These are adjustable through the whole range 0-100%.

On initial startup the system assumes the max kW level has been exceeded and the load will need to reduce below the min level before set(s) are dropped off.

The priority duty generator is selected on the SCADA system, and all generators will synchronise to that generator. However, the system will automatically disconnect the priority generator should the load demand decrease, providing that the engine operating hours of the remaining generators is above the balance engine hours requirement.

We have the knowledge and capabilities to design and install synchronising systems for use in the UK, Europe and Africa. Contact us to discuss your power requirements on (+44) 01246 912 014 or email hello@generator-man.co.uk.